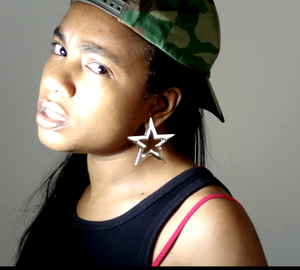 Hillary Hawkins is a Christian Hip Hop Artist based in Los Angeles, CA & New Jersey, USA.  Her singles “Puppet on String”, “Where Are The True Christians?” and “Black Lives Matter” & debut Hip Hop album Love Lessons 101 are available on Apple Music, iTunes, Amazon, Spotify, iHeart Radio etc.
​
The 3X Voice Arts Awards nominee also has 100+ audio books available on Amazon, iTunes and Audible including The Hustler’s Daughter, Closet Full of Coke, Trifling 2 and The Book of Revelation King James Version. All characters, male and female, adult and child, were voiced by Hawkins.  A true triple threat, Voice Actor / Singer / Rapper Hillary Hawkins is also the voice of Dizzy in the “Awesomenauts” video game and that’s Hillary Hawkins singing and rapping on the soundtrack!

Hawkins’ career began as the singing voice of Vanessa on Nickelodeon’s “Gullah Gullah Island” and as Kate on Nickelodeon’s “Are You Afraid of the Dark?” when she was a child. She also was on TV everyday as Host of Nick Jr. and was a live events Host for Radio Disney.

One of Hillary’s favorite places to be, besides with family, is on stage! Stage credits include “Futurology The Musical” (Off-Broadway), “Seussical The Musical” and “If You Give A Mouse A Cookie & Other Story Books” (National Tours) & more.  In 2020, Hawkins had a dream she was getting ready to perform a song from her 2 woman show “Jaded The Musical” but when she hit the stage they dropped a hip hop beat instead! Hawkins who believes the show must go on made up a rap on the spot to go with that beat and that performance was one one of the most fun dreams she’s had in her life!

Hip Hop Artist Hillary Hawkins would like to thank God for the dream and to encourage all her fans to follow their dreams because dreams come true!!  (Jeremiah 29:11, Matthew 6:33, Proverbs 16:3, Psalm 37:4)
Hallelujah and Glory be to God!