BLACK FEMALE MARTIAL ARTIST TRAINING IN NUNCHAKU DEMONSTRATES HER NEW MOVES! SHE'S A BIT OF A TOMBOY BUT DECIDED TO LET HER HAIR DOWN! LA, CA, USA

#4 Woman with nunchucks at the gym working out

Actress Martial Artist Hillary Hawkins is a young female martial artist with personality!!! She has several different looks, has been training in karate, kickboxing and more! Age Range: Teens & 20s Based in the USA.

This was back in 2019 when Hillary Hawkins first started learning nunchaku. Here she is practicing outside in her jeans, t-shirt and denim jacket. Hairstyle: Pigtales
18+ to play younger female martial artist. Height: 5'2" New York Metropolitan Area

This is a 30 second video of Actress Martial Artist Hillary Hawkins. Fans are writing in saying "You should be in Cobra Kai 🐍 🥋💪🏾" and "You Need To Be The Next TNT Jackson, Foxy Brown, Or Other Karate Women Martial Movie Stars". Thank you. 🙏 🙌🏽

Footage of actress martial artist Hillary Hawkins working out at the gym with nunchucks. One of several martial arts clips available for licensing. Contact

#11 Around the neck Between the legs Drills

Hawkins swings her nunchucks around the neck and demonstrates Around The Neck Part 2: Between the legs. Female Martial Artist. Weapon: Nunchucks 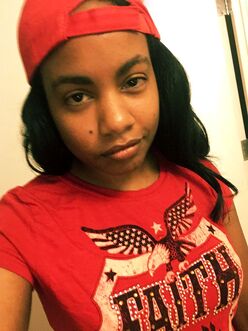