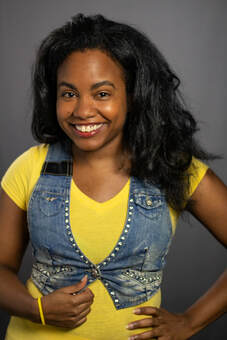 Hillary Hawkins is an actress, screenwriter, producer and playwright, lyricist, composer based in Los Angeles, California and New Jersey, USA. She achieved her Dual BA in Spanish & Creative Writing from Smith College in just 3 years on the Dean's List while working as a Radio Personality for WEIB 106.3 Smooth FM.
​
Hillary is Actress, Screenwriter, Producer of "Stuck For A Reason", aired on ABC, CBS, NBC & FOX on African American Short Films & "A Pill For Two", nominated for 7 awards, winner Best Actress Award in a Drama. "A Pill For Two" is based on Hawkins' full length play JADED THE MUSICAL (DC Black Theatre Festival selection, Scratch Night at Theater for the New City selection, UNFringed Festival winner.) Upon submitting JADED THE MUSICAL to New Perspectives Theatre Company, Hillary became one of six playwrights selected for the Women's Work Project wherein she created a new play “Sherri” which was produced by New Perspectives Theatre Company.

Hillary is a 3X Voice Arts Awards nominee. She has been nominated in the Teen Category, Metaphysical Category and in 2018, Hillary was nominated for Author Performance, Best Voice Over for something she created, performed and produced: “Molestation Monologues.”

Molestation Monologues made the Amazon Bestsellers List along with several of her other written works: How To Help A Friend Who's Been Raped Abused and Traumatized; Secrets Unleashed Game Talk Play Heal and many more…

Hawkins, who is constantly creating, recently released episode 1 of her animated drama series "The Case Files." It revolves around a Caseworker named Hope on a mission to save the children. Hawkins, like Hope, use to work full-time in Child Protective Services. Hillary Hawkins also created a cartoon musical “Heart2Heart”, airing Thursdays on YouTube.

Hillary Hawkins is the former Host of Nick Jr. and was on TV everyday introducing shows such as Dora The Explorer, Bob The Builder and Little Bill. She also was a Live Events Host for Radio Disney. Hillary's career began as the singing voice of Vanessa on Nickelodeon's "Gullah Gullah Island." She also was Kate on Nickelodeon's "Are You Afraid of the Dark?" and Keisha on "New York Undercover." Hillary has her Black Belt in Karate and was born a bit early, at six months instead of nine, and to the doctor's surprise she's still alive.